We are delighted to be featured in the September 2018 issue of the Christian Small Publishers Association magazine.

Text of the article:

Talent, technology and listening to God are the foundation of Tuscawilla Creative Services, an indie publishing company operated by the husband-and-wife team of Jacquelyn Lynn and Jerry D. Clement.

Jacquelyn Lynn began her professional writing career more than three decades ago, freelancing for business magazines and ghostwriting. She has written or ghostwritten more than 30 books and thousands of articles, most in the business arena. After Jerry D. Clement retired from the corporate world in 2000, he launched a second career in photography, videography and graphic design.

They formed Tuscawilla Creative Services (TCS) to offer clients writing, publishing, design, and other creative services. “We were as busy as we wanted to be and having fun working together,” Jacquelyn says. “Our clients were primarily entrepreneurs and we created tools they could use to promote themselves and their companies.”

Then God called Jacquelyn to combine her faith with her business experience and write a book of devotions for businesspeople. “That’s when we became indie publishers,” Jacquelyn says.

TCS published Words to Work By: 31 devotions for the workplace based on the Book of Proverbs by Jacquelyn Lynn in 2012. That was followed by Finding Joy in the Morning: You can make it make it through the night, a book about getting through tough times, in 2014.

The second edition of Finding Joy along with the companion Finding Joy Journal was released in 2017 and the audiobook (narrated by Jacquelyn and produced by Jerry) in 2018. Intentional Joy, a Bible study based on Finding Joy, was published in 2018.

Jacquelyn and Jerry have collaborated on a series of Christian coloring books for adults: Faith Words, Christian Meditations and Finding Joy in the Morning. TCS also publishes Conversations, a series of interview-based books. The most popular book in that series is, sadly, How to Survive an Active Shooter: What You do Before, During and After an Attack Could Save Your Life.

Jacquelyn is currently working on her first novel, Choices, which is scheduled for publication in November 2018. “This will be the first in a series, and the dominant theme in the story is forgiveness,” Jacquelyn says.

Jacquelyn and Jerry are thankful that technology has made it possible for them to blend their talents and produce books, audios and videos that share the Good News. 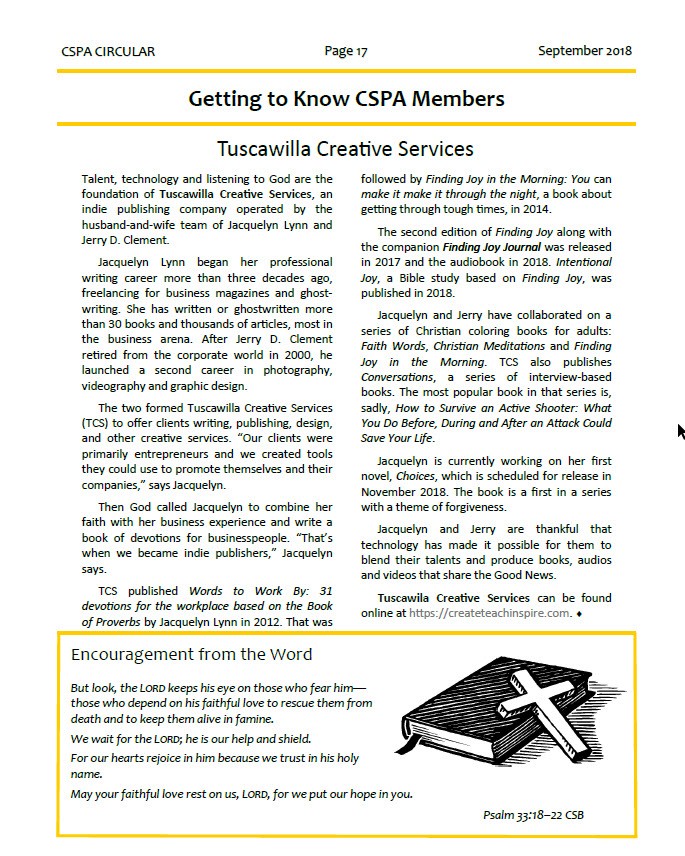