Is Your Bio Accurate?

Is Your Bio Accurate?

A young entrepreneur doing some major hotel renovations in Orlando recently got caught with some inaccurate information in the bio on his company website. He says it was a mistake and it’s apparently been corrected, but the fact that it happened is casting an unnecessary shadow on his reputation and credibility. 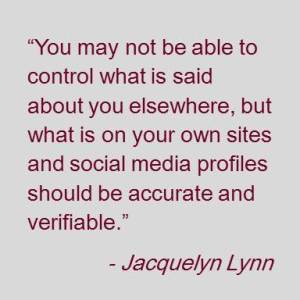 If you put yourself in the public eye, even in a small way, expect someone to research your claims. And if they don’t check out, expect that to be the story that gets more attention than whatever other message you’re trying to promote.

Nik Patel of Alena Hospitality and First Farmers Financial (the entrepreneur I mentioned above) is a perfect example. When the Orlando Sentinel did a story on his company’s renovation of a downtown hotel, about 20 percent of the article focused on what the writer called “inconsistencies in Patel’s personal narrative.” And another Sentinel writer couldn’t resist taking a poke at Patel for it on Facebook.

It was a significant distraction from Patel’s interesting business story.

Apparently Patel’s corporate biographies on two different websites listed a degree he doesn’t have and a part-ownership of a professional sports team that can’t be confirmed. According to Sentinel writer Jim Stratton:

Patel, accompanied by Alena attorney Rusty Huseman, said he didn’t write his bios and was unaware they were inaccurate.

“I need to get that fixed right away,” he said to Huseman. “Can you make a note of that?”

The company’s website was changed after Patel’s interview with the Sentinel.

Will Nik Patel recover from this? Of course. As long as no other issues surface, it will be just a small bump in the road for him and should be forgotten (unless he decides to run for public office). But it shouldn’t have happened.

It doesn’t matter how important or busy you are, you should take the time to review what your team is saying about you before it’s made public. You may not be able to control what is said about you elsewhere, but what is on your own sites and social media profiles should be accurate and verifiable.

I’ve addressed this issue before in my blogs You are Responsible for What Goes Out Over Your Name and What is Your Writer Publishing Under Your Name.

You can’t shift the responsibility for this to anyone else. You might delegate the work, but it’s up to you to demand that your team produce accurate material and to provide them with the information and access they need to do it.

It doesn’t matter who writes it, YOU are responsible for what your bio says.

Join the conversation by sharing your thoughts below.

Update (Oct. 2014): Nik Patel was arrested on Sept. 30, 2014 on federal allegations of fraudulently selling $150 million in loans to a Milwaukee-based finance company. Two weeks later he agreed to sell a number of assets (including five hotels, two homes, luxury watches and cars, and gold coins) to pay some debts. According to his attorney, Mark NeJame, Patel is denying any wrongdoing. This blog is not making any comment on Patel’s legal situation.

Update (March 2018): Nik Patel was sentenced on March 6, 2018 to 25 years in prison after pleading guilty to a $179 million loan fraud scheme. Just days before the sentencing, federal prosecutors accused Patel of engaging in a new multimillion-dollar loan fraud. In my original post, I wrote that Patel would recover from the mistake of publishing an inaccurate bio as long as no other issues surfaced. Clearly, there were other issues and the inaccurate bio may have been an early clue. Patel’s criminal conduct notwithstanding, the message of this blog is important: You are responsible for the accuracy of the information you and your team disseminate.