Ship of Fools: How a Selfish Ruling Class is Bringing America to the Brink of Revolution
Tucker Carlson
Free Press, $28 hardcover

Is the United States a ship that’s about to sink?

How did the United States get to where it is today—an intensely divided country where people of differing opinions can no longer engage in civil discussions, where the once-thriving middle class is declining and an elitist ruling class has emerged, where a flamboyant billionaire who had never held an elected office before became president? 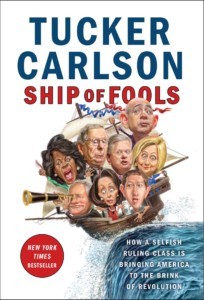 Things have never been perfect in this country, but they are a whole lot less perfect now than they’ve ever been (recent gains notwithstanding). A country born out of a revolution by people who wanted freedom has never been less free than it is today. How did this happen?

In Ship of Fools, Tucker Carlson offers a thoroughly researched and documented picture of how the United States has evolved over the past century from an imperfect but working democratic republic to a place that should terrify every thinking person.

In the introduction, Carlson writes:

“Trump’s election wasn’t about Trump. It was a throbbing middle finger in the face of America’s ruling class. It was a gesture of contempt, a howl of rage, the end result of decades of selfish and unwise decisions made by selfish and unwise leaders. Happy countries don’t elect Donald Trump president. Desperate ones do.”

Full disclosure: I voted for Donald Trump and, while I don’t agree with him 100 percent, I think he’s doing a good job.

The multi-faceted hypocrisy of the elites is laid bare. With honesty and wit, Carlson exposes the people who are making laws, running companies, teaching our youth and telling all of us how to think and behave.

Ship of Fools tackles pretty much all of today’s hot-button issues—identity politics, immigration, foreign relations, income inequality, racism, sexism, other isms, health care and so on. The book objectively traces how those issues have evolved from things we could work together on into divisive conflicts contributing to the decline of our country and for which compromise seems impossible.

Carlson’s engaging style makes Ship of Fools an easy, sometimes humorous yet frightening and depressing read—and he spares no one. His assessments of Republicans and Democrats, conservatives and liberals, moderates and extremists are well-researched and fair, making this book a worthwhile read for everyone, regardless of where you are on the political spectrum. Finally, he offers a simple and effective solution.

Ship of Fools is a book of truth—and the truth will set us free.