Just Say What You Mean

Just Say What You Mean

Whether writing or speaking, your goal should be to communicate, not to impress.

Many years ago, I was at a Mensa gathering. It was a games night and we were playing Password. I usually do well at word games, but not this time. My partner decided he wanted to show off his expansive vocabulary rather than give me clues I would understand. We lost by a huge margin.

Fast forward a couple of decades. I was meeting with a client and it happened that his company was conducting a final interview with a candidate for a senior marketing position. My client invited me to sit in on that interview and later asked me what I thought.

It seemed to me that the candidate used a lot of jargon and popular buzzwords and phrases, but I wasn’t sure what he was really saying. When I said that, my client (an entrepreneur with little formal education) replied, “Yeah, I don’t understand most of what he says, but he’s got all these degrees and experience, so I figure he knows what he’s talking about.”

They hired him—and it was a mistake. He was totally ineffective and was terminated a couple of years later.

One more story: I was working with another writer on a book. She gave me a chapter she had researched and written. There was a section that was particularly difficult to understand (and the subject of the book wasn’t complex).

When we reviewed her work, I asked her to tell me what she meant. She did, clearly and succinctly, using shorter sentences and simpler words. I asked, “Why didn’t you just write that?” She confessed that she was trying to impress me and the publisher.

“When obscurity pollutes someone’s communication, it’s often because the author’s goal is to impress and not to inform. The low road to impressing an audience is to make them feel inferior, by using words they won’t understand.”

Like the Password partner I mentioned earlier, you may know plenty of words your audience doesn’t. But what does it accomplish if you fail to communicate your message?

Whether you’re speaking or writing, the best way to impress your audience is to present your information in a way they can understand and use. Keep these tips in mind:

The people who are most impressive are usually the ones who aren’t trying to impress. Be that person. 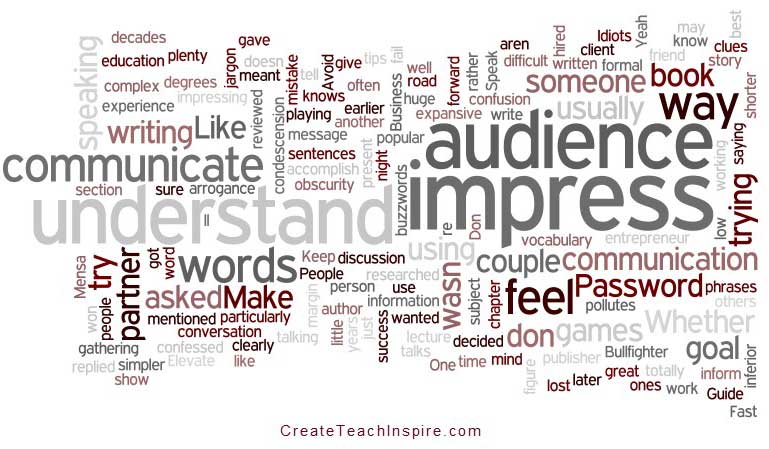