May I Have Your Attention, Please?

May I Have Your Attention, Please?

How do you handle other people who multitask when they should be focused on you?

Years ago, back in the days when cell phones were the size and weight of bricks, an associate of mine suggested going to lunch. After we were seated, she pulled out her phone and placed it on the table. Within three minutes, it rang – and she spent almost the entire time we were in the restaurant taking calls, chatting with (apparent) friends, giving professional advice (she was a mobile veterinarian) and scheduling appointments.

It was worse than eating alone. I never found out why she wanted to meet with me – and I never had lunch with her again.

It was also a sign of things to come. Cell phones have evolved into smartphones and the occasional cell phone call during a lunch or meeting has escalated into a steady stream of texts, emails, social media posts and more.

Yes, I confess I’ve used my phone when it wasn’t appropriate – even to the point of exchanging texts during church with a friend who was in the choir loft while I sat in the back of the sanctuary. But I don’t let my phone serve as a weapon of mass rudeness.

You can read Daniel Gulati’s great observations about the issue in his blog, Multitasking’s Real Victims.

The reality is: human beings cannot focus on more than one thing at a time. When we think we’re multitasking, we’re really just ricocheting from one thing to another and back – and we’re not doing anything well.

That should be reason enough not to multitask by texting or taking calls when you’re with someone, but here’s something else: It’s just rude. Period. And it wastes the time of the person who is trying to focus on the actual issue at hand.

Gulati suggests some ways to respond to multitaskers, including calling them out, rescheduling the meeting, and even just walking away – all things I’ve either done or fantasized about doing.

I’ve also found that it’s effective to begin a meeting by pulling out my own phone, making a show of turning it off and saying something like, “I want to be able to focus on what we’re doing, so I’m going to shut my phone off.” That often prompts others to do the same.

What do you do to deal with multitaskers? Join the conversation below.

Update: When I shared this post on LinkedIn, James Saelzler commented: “In a meeting I suppose you could ask them whether they need the assistance of the entire group to resolve the issue that just came up…or whether they need to take that outside so we don’t eavesdrop on their business dealings.” Excellent suggestion, James. 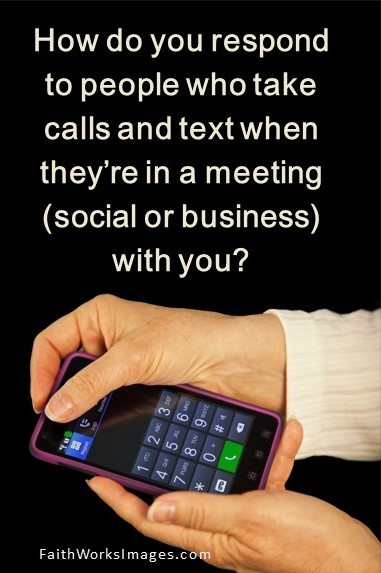